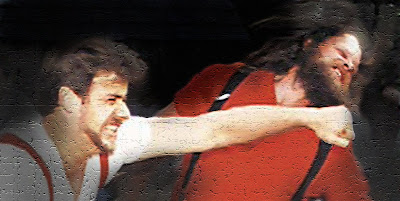 In Karate, there is a concept called "Ikken Hissatsu". It is sometimes translated as “one punch one kill”. Many people believe this means that a fight should be finished with one decisive blow. Some see this as either impractical, improbable or worse, magical thinking. It may be a concept but it is not impossible. Consider this example from today's news.

LAS VEGAS -- A racial comment in the restroom of a Las Vegas Strip casino restroom preceded a single fatal punch that left a tourist from Utah dead and a Florida tourist jailed in Nevada on a murder charge, authorities said Wednesday.

Benjamin Gerard Hawkins, 37, of Gainesville, Fla., took offense to John Massie's comment about "a black man in a yellow shirt" while both men were in the restroom at O'Sheas Las Vegas Casino shortly before the fatal 12:45 a.m. confrontation, according to a police report.

Moments later, Massie was felled by a single punch to the jaw. Massie was pronounced dead less than 30 minutes later at Desert Springs Hospital in Las Vegas.

"One punch," police homicide Lt. Lewis Roberts told The Associated Press. "He was out. Never got back up."

Hawkins was held at the Clark County jail pending a Thursday court appearance in Las Vegas. It wasn't immediately clear if he had a lawyer, and he police said he refused jailhouse interview requests.

Statistically the odds that you would drop an assailant with one strike may be small but it does happen. The point that I would like to make is that it could happen to you. The reality is you could be in either man's shoes. Are you prepared for the ramifications of that possibility. In the news story we see two small choices that have enormous and lasting consequences. If you are practicing Karate and being trained well you should be learning two foundational skills. The first, "Holding your tongue". The second, "Walking away". Good training should prepare us to respond rather than react.

The outcomes of this sadly common and foolish situation were death and jail. Sad indeed when you consider the options were life and freedom.
Posted by Mark Cook at 11:38 AM

Email ThisBlogThis!Share to TwitterShare to FacebookShare to Pinterest
Labels: “one punch one kill”, Ikken Hissatsu, Karate