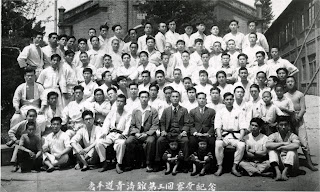 Recently two online friends helped me with the translation of some historic Chung Do Kwan photos. This quote is from Tashigae...


"OK, here we go. The first three characters, in case you haven't recognized them by yourself yet, are 'To' - 'te' - 'do' ('Tang' - 'shou' - 'dao' in Chinese), 'Chinese' - 'hand' - 'way', in other words Tode-do, the old name of karate-do. The three next characters are Chung Do kwan ('qing' 'tao' 'guan' in Chinese, 'guan' being 'kwoon' in Cantonese and 'kan' in Japanese, as in 'Shotokan', Bujinkan', etc.) and mean Green Wave school (in Chinese, 'guan' actually refers to a building with only one or two floors but a very large surface. Didn't know how to translate that, so I chose to translate contextually as 'school', since it's often used as a metonymy for a school or style in Japanese). The next three characters mean 'the [N]th time' ('di [N] hui' in Chinese, don't know how to pronounce them in Japanese). The next character is unknown to me (sorry), but the next one ('cha' in Chinese, Japanese pronounciation unknown) suggests me that the two together might mean 'examination' or something like that. The next one ('hui' in Chinese) means 'meeting', 'gathering'. The last two characters ('ji nian' in Chinese) mean 'keep record', 'keep memory' (I must confess I had to ask my beloved for this one ).
To sum it up:'record of the [N]th (examination?) meeting at the Green Wave dojo' ([N] being 3, 5, 7, 2 in that order)".


Here is a bit more from ButterflyPalm a friend from Milasysia


"You were doing so well I thought you should carry on.


I was suprised by the word "Green". I was expecting Blue wave. I have read that Funikoshis's "Shotokan" could be translated as Pine Wave Hall or school. In " Karate do My Way of Life" he spoke of the pine trees in his native Okinawa. I later asked Tashigae about the color question. This was his reply..


ButterflyPalm's comment about the founding of the Song Moo Kwan was also in regard to another photograph. Both Won Kuk Lee and Yong Taek Chung were present in the photo commemorating the opening of that Kwan.
Posted by Mark Cook at 10:52 AM

MR. Mark Cook,Sabùm nim:
I've visited your site some months ago, but time is tyrant, we know. I've started Chung Do Kwan with SBN Han Chang Kim in 1968 in Buenos Aires (previously studied first Japanese and afterwards okinawan karate)so appreciate so much the picture you have shared in the path of truth or research. Thank you for this precious gift!
The cinese students of mine have traduced those writtings like this:
"Tang Shou Tao - Ching (o Qing) Tao Kwan (or Guan)- second (annual?) testing - souvenir picture - 1954, 06, 06.
But the main surprise is the version of the controversial translation of Ching, pronounced in korean Chung: clean, neat, pure, genuine - wich together with Do (in this case: sea wave)form a metonimical syntagm for: "ever lasting sincerity" or "renewable genuineness", which is pregnant of meaning! Otherwise, "School of the blue wave" sounds more appropriate for a Surf Club! (laughs)
Leave you our official web site, so if you please you can "surf" on it: www.tangsudo.com
Sincerely yours in Mu Do: Roberto Daniel Villalba