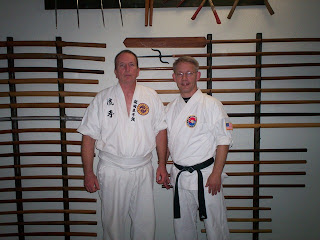 Not long ago I received an invitation from Kyoshi Greg Lindquist to meet and spend and evening training with Taika Oyata. Greg has been training with him for 39 years. Greg has recently relocated his dojo after a fire in an adjacent building caused the closing of his previous dojo. His dojo is in Overland Park, Kansas. You may not think of O.P. as a hotbed of MA activity but within a mile you can find 4 schools teaching Iaido, Chen Tai Chi, Chung Do Kwan, and Crawfords American Ju Jitsu. Greg wife also teaches Chinese arts. The evening was an opportunity for a small group of people to get together and see the new space and train with Taika Oyata. After a few minutes of greetings an a tour of the dojo we were ready to begin. Someone asked Mr.Lindquist what we would be doing and he repiled whatever was in Mr Oyata's head. 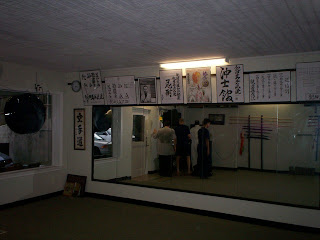 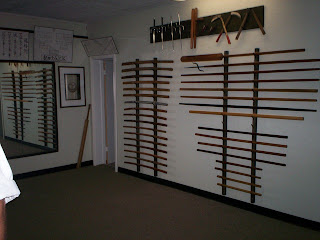 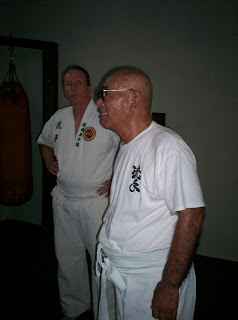 At the age of 80 mr. Oyata is still vigorous and filled with enthusiasm. He smiled and even chuckled frequently. I personally had to work very hard to understand him. Mr. Lindquist helped clarify any points I misunderstood.He corrected me frequently and I was the first to be used for instructional purposes. At one point of the evening he said to me. "I not hurt you". He then demonstrated a movement from NaiHanchi. I was effective and instructional but in no way brutal. His approach that evening was not like some demonstrations of the past.


If I had to choose one word to describe the evening I would say "Technical". One other thing I caught this evening was Oyata's use of the words "Basic" and "Foundational" he would say "Is a not basic! is a foundation!".

After we finished Mr. Lindquist and Mr. Oyata took a few minutes to clarify a couple points.He also talked about "Shu" and "Jitsu" and their meanings. At one point Oyata pantomimed a conflict with an assailant. He stressed de escalation. He said "The meaning of a martial arts is a NO TALK. Is a I want no problem. Okinawan (are) like that". It was also clear that he also meant the attacker, because of "Shu" (being hidden) should never know what you are capable of or if neccesary what hit him.
Posted by Mark Cook at 3:57 PM