Some of you are already familiar with the work of Iain Abernethy. For those of you who are not familiar with him or his work, here is a short bio from his website.

Iain Abernethy is one of the UK's leading exponents of applied karate and kata application (bunkai). His martial arts DVDs and books have sold worldwide and have been translated into other languages. Iain holds a 5th Dan with both the British Combat Association (awarded by Peter Consterdine 8th Dan and Geoff Thompson 6th Dan) and the EKGB (awarded by Doug James 7th Dan).

Iain is in great demand on the seminar circuit and teaches many seminars on his approach to practical karate both here in the UK and overseas. The bunkai that Iain teaches are not prearranged karateka vs. karateka applications. Nor are they static, complex, elaborate or reliant upon finite movement. Iain's approach to karate makes kata application practical, simple, direct and accessible to all.

In that spirit of accessibility Iain has created an online magazine titled "Jissen". He is preparing to release his 3rd issue. The magazine is released free of charge in a pdf. format. I could not be more excited about it. First, I'm excited because the previous two issues have been outstanding. The second reason I'm excited is that I was invited to contribute an article to the publication. Quite an honor wouldn't you say? In all honesty, one of Iains stated goals is to publish work contributed by martial artists of any rank or level. Everyone is invited.

The article I contributed has one unique feature, it is in cartoon format. The images are from "Oldman's Boobishi" a digital collection of drawings that are a humorous record of what I have found as I have explored Kata / Forms over the years I have been training. The image below is a possible application from Pinan Nidan / Pyung Ahn Edan. The article in "Jissen" is similar in style. It is an excerpt from NaiHanchi /Tekki/ Chulgi Chodan 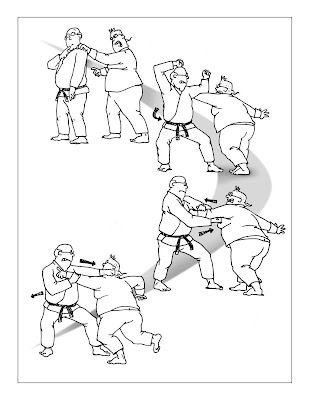 The first two issues of "Jissen" are available in Iain's website. If you are interested in receiving Issue #3 it is now available at...